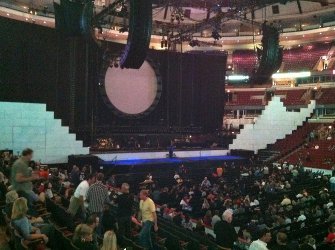 And so it continues.  Perhaps a concert series?  Tell me what you think.  Anyway, The first US date kicked off in Chicago’s United Center, 20. September 2010.  I won’t post the set list, BUT Again… the set list should come as no surprise.

This was a first time for many seeing this intense production.  It was my first time.  I have a “no pee during a show” policy but close to the end of the first set, nature called and I couldn’t hold it anymore.  The cool thing was I felt like Pink during the bathroom scene in the film because of the concert noise in the background.  You gotta try it! Anyway, I had such a blast meeting up with everyone from AFG again and I even got to meet some great new people.  It was a very special time.

For this podcast, I took two recordings and blended them together.  One by Ravingandrooling which I doctored up and another by Tapehead2, from his 2nd version.  It sounds mind blowing!  You be The Judge.  Get it?  Enjoy!