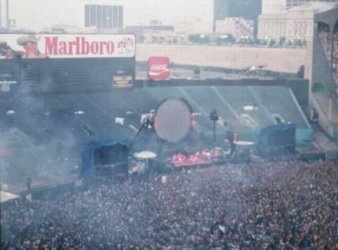 For this installment, we go to Municipal Stadium, Cleveland, OH, 25. June 1977.  American shows in the summer of 1977 were particularly rowdy, but this recording is probably most notable for the numerous cries of “SIT DOWN!” throughout the show. Fortunately, the music on this release comes out on top for the majority of the show.  The occasional fireworks set off yet Roger manages to keep his cool during this performance but by this time in tour he was already becoming agitated by the carefree behavior of these massive audiences.  Roger can be heard shouting “46″ during Pigs (3 Different Ones) after the second verse, which is one of the identifiers for the concerts on this tour, however he must have lost count because this was actually the 47th show.

The podcast kicks off with Jeff Beck live, last week at the Royal Albert Hall with David Gilmour as surprise guest, performing Jerusalem.