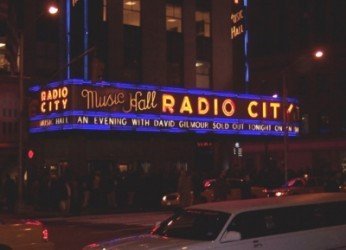 David Gilmour opened his North American On An Island tour at New York City’s world famous Radio City Music Hall ten days ago.  The concert was absolutely mesmerizing.
I was fairly close to the band, nine rows back.  It was GREAT, however while people up front had the better view, anyone towards the back of the venue had the better sound.  This recording was done by Dan Lynch from the rear, left side of the venue.  In less than 24 hours after the show, he had the concert available on various trading groups on the Internet.
I raise my beer glass to you Dan.

The sound is excellent!  I did however run it through a cool device to bring it out more.  So if you have a good sound system or headphones… just close your eyes and you are there.

David was amazing and Rick was incredible.   It sucked that Nick wasn’t there and Roger for that matter, but I kept thinking, “This is at least half of Pink Floyd, or 2/3 of post-Waters Floyd.”  Not bad considering it’s the closest thing you’ll get.