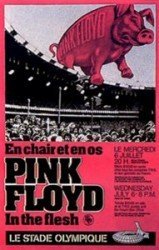 In the Flesh concert #61, at Montreal’s Olympic Stadium, 6. July 1977, Montreal, Canada.  The infamous spitting incident… stadium crowds push Roger to build The Wall.  This was the last show of the tour and the last time Animals would be performed live by the Floyd. It was also the last time Roger would perform Wish You Were Here and Money with Pink Floyd until 28 years later for the famous Live8 reunion.

It’s an audience recording from the floor section. Sound quality is about a 3.5 on a scale of 1 to 5, (5 being the best

A few years back there was an excellent article with photos of this concert by Wray Ellis here.