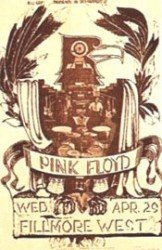 “Recorded on Pink Floyd’s third American tour, this show introduced San Francisco to some of the newer material from the Ummagumma LP, and a taste of things soon to come on the Atom Heart Mother LP, to be released later that year. This San Francisco audience is particularly quiet and attentive, a fact that seems to have facilitated a more intimate, unique and focused performance than other dates on this tour” – Wolfgang’s Vault.   Show playlist.