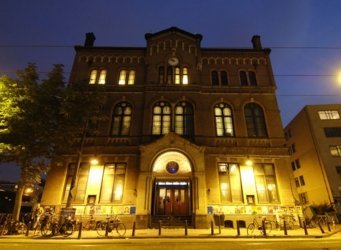 On the 23rd of May 1968, Pink Floyd performed three shows in one evening.  One gig was just outside Amsterdam but the other two were at Paradiso.

The venue was once an old church and has high ceilings and a balcony overlooking the stage area.  Imagine how cool it must have been watching Floyd perform A Saucerful of Secrets with three large illuminated stained glass windows above the stage.

These two gigs took place within the first six months of Paradiso’s opening as a publicly-subsidized youth entertainment center.  It was also one of the first locations in which the use and sale of soft drugs was tolerated, so space out and enjoy.