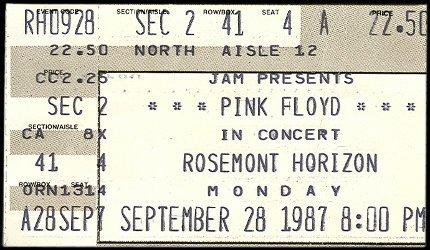 I had normally planned on presenting my matrix recording from Foxboro, May 1988 as like an anniversary thing.  Unfortunately I had to abort the project because the edited files became corrupt.  The ghost in the Machine got the best of it.

A while back someone handed a copy of a mystery 1987 Floyd gig in hopes that I could identify it and found that it was from Floyd’s last night at the Rosemont Horizon in Chicago, 28th September.  This podcast features that recording which I also discovered happens to be taken right from master, all doctored up to sound a little better.

3 thoughts on “A Clearer View”